Could Guarantano surprise us? (Merged)

He needs some help out there. I wonder how many times he hears “sorry, my bad” after getting drilled yet again?

He can't even make basic reads and he has been in a college football program for 3 years now.

You're so dumb it hurts.
Click to expand...
So who has said JG is elite?
Likes: k-town_king
S

kbear01 said:
We have a lineman 7 yards downfield.
Click to expand...
It doesn't matter if the ball is caught behind the LOS.

sjt18 said:
It doesn't matter if the ball is caught behind the LOS.
Click to expand...
The receiver is passing the line of scrimmage. But now I see the lineman is just a little passed 5 yard mark.

kbear01 said:
Because he ate it, way more than he threw it away. Also, I wouldn't say that his percentage was "So high". It was ok. But not great. Especially, considering that he threw alot of short, high percentage passes.
Click to expand...
How were his yards per completion so high compared to everyone else if he threw short passes a bunch? I ask because his numbers compared to everyone else just doesn't match what you are saying. Do you have a different set of stats or do you not believe the ones that are out there?
Likes: Devo182 and k-town_king

Well, we were 7th in the SEC in yds per completion. That's not awful, I guess. He completed 153 passes in 12 games. That's a mere 12 completions per game.

I am not anti-JG. I have said many times, he desperately needs to prepare better, in the film room, all week long.

BeardedVol said:
Probably has a bit to do with this: 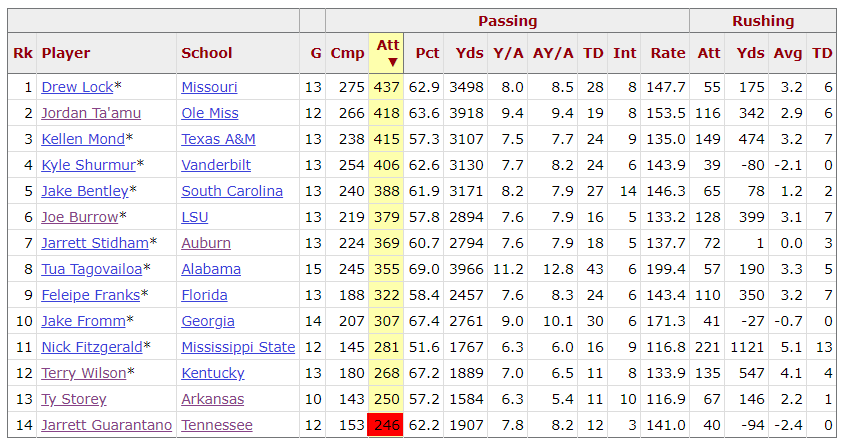 And the fact that he was prone to dump passes to his check-down man at or behind the LOS, or take a sack rather than throw the ball down field
Click to expand...
THE lowest INT/attempts (interception rate) in the league?

this is too easy.
Likes: k-town_king

BeardedVol said:
If JG threw at or above the SEC average number of attempts in 2018, 346, he most likely would not have maintained his low interception numbers or his QB rating. Has nothing to do with 2019, he's got an entire off season to try and improve, but he ends 2019 with <250 attempts, then he'll most likely have similarly low passing TDs, and we'll have won a similar number of games, and just like in 2018 his QB rating and his low number of interceptions still won't have mattered as far as the success of the team is concerned.

In spite of JG's stats we were 121st in total offense, only ran 716 plays, 3906 total offensive yards, averaged 330 YPG. QB-play has more affect on the game than any other position on the field, and it's a good part of the reason that our offense was stagnant in most games during the 2018 season.
Click to expand...
Well...we were 38th in YPA passing and 108th in YPC rushing. Do you think our lack of offensive production was JG's fault or the fault of the running game?

One is people who are fans of UT. There are people who think JG is a smaller and larger part of the offensive problems in this group. Their "agenda" is for UT to win.

The second are the cult like fans of JG who really only care about defending JG and denying his weaknesses. They'll "hate" on any other player, group of players, coach, or UT generally... to avoid laying any blame at all at the feet of their cult idol. You... are the model for this "agenda".
Click to expand...
Lol there is literally no one in existence of the 2nd group. Delusional. He ain't Tom Brady.
Likes: k-town_king

Vol_Lord_1990 said:
TDs, yards, and wins are the only stats that matter. JG is garbage in all of those categories.

He had a decent 3rd down completion percentage because of smart and conservative play calling by Tyson Helton.

JG was almost never forced to pass for more than 5 yards on 3rd down.

JG has never scored 3 TDs in a game and you idiots really think he is good?
Click to expand...
(gross) TDs and yards do not account for efficiencies. That is why YPA and ratios matter. JG barely passes, so total starts do him an injustice. We were 111th in attempts last year iirc.
Likes: k-town_king

Vol_Lord_1990 said:
View attachment 194893
You're a homer. Just stop. You look stupid as **** at this point.
Click to expand...
Smdh. Do you even see what you're posting? Thanks for proving my point for me. Better qbr than any season of Dobbs, except as a senior. Just as I posted.

Guarantano should be a bright spot for the Vol offense this year, provided the Oline can keep him upright and give him a smidge of time to go through his progressions

Devo182 said:
Smdh. Do you even see what you're posting? Thanks for proving my point for me. Better qbr than any season of Dobbs, except as a senior. Just as I posted.

Take a lap, junior.
Click to expand...
Numbers do not lie. But, they also do not show everything. Dobbs had the legs to make something out of nothing, and the INTELLIGENCE to know when to exploit his abilities. Many times resulting in BIG PLAYS, by extending plays, or gaining big chunks, on the ground. At the very worst, he rarely had negative plays, and MOVED THE CHAINS. Here is the sad part.........JG has the very same tools, but rarely uses them, when necessary. Maybe he's gun-shy? I will not pretend to know. But, pulling it down, and getting 5 yds, is better than losing 12, any day of the week. Plus, if you are going to get hit, so often, get hit on your own terms. Extend drives. Rest the D. Fatigue the opponent. Tired defenses make mistakes. I would love to see a new JG, this coming season.
Likes: Big Al Orange
S

Devo182 said:
Lol there is literally no one in existence of the 2nd group. Delusional. He ain't Tom Brady.
Click to expand...
Yeah. Read k-town king's comments going back since he joined the board. There are others... but he's the worst. I haven't really noticed your posts. But typical of that second group are those who will say "he's not perfect" then blame everything on someone else and deny any specific criticism.
U

Vol_Lord_1990 said:
Only a moron would compare JG to Dobbs.

Our offensive line gave up a boat load of sacks with Worley at QB. As soon as Dobbs came in the O-line rarely gave up sacks and the entire offense got better. JG will never be half the player that Dobbs was.
Click to expand...
I never said he would be. Only thing I said was dobbs got a lot better after his sophomore year. Which is a fact and I said I think JG will as well

Thought it was interesting the takes from everyone earlier this year. Specifically, look at some of Steven5198 and BreatheUT posts. Both of those posters really nailed it, I think. What's fascinating to me is a lot of people listen to a former QB of ours on the local radio and take his word for gospel on the QB play. Well, he has been excessively wrong in his thoughts and these two posters have been quite right! I would be interested to know their backgrounds, just for the sake of discussion. And, if you defended JG I would love to hear your thoughts as well. Not bashing the kid, just looking back and stumbled upon this and thought it was relevant to our year long struggle to find a QB that can help us win and win decisively.

Other_Guy said:
I know we keep saying this, but the natural expectation is for the veteran returning OL to be improved. Then theres the addition of Morris, potentially Wright as well. The RBs should be improved.
Then you add Jim Chaney and Tee Martin. Now we've heard Jennings is coming back.
I think the defense takes a step in the new system as well and improves a little.
This really is beginning to sound like a recipe for a very successful season for JG, even surprising some of us at VN. Does anyone else see a potential big jump for JG, or is what we've seen all there is?
Click to expand...
No........just no.

Tennesseefan2019 said:
Tennessee will win 28-20 despite possible mediocre quarterback play
Click to expand...
can't you make it a 9 point win? Those one score games make me too nervous down the stretch!
Likes: Tennesseefan2019

Just for clarification for those opening this thread. It has been BUMPED. It's an old therad, but shows that some of our posters absolutely nailed JG's shortcomings and what the year has played out like.
Likes: Big Al Orange, FLVOL_79, USMC-TNVOL and 1 other person

99bubble said:
Just for clarification for those opening this thread. It has been BUMPED. It's an old therad, but shows that some of our posters absolutely nailed JG's shortcomings and what the year has played out like.
Click to expand...
wow, that's great. I hope they are all happy and giving themselves a pat on the back. Me, I'm rooting for whatever Vol is playing....
Likes: PulaskiVolFan

99Vol said:
wow, that's great. I hope they are all happy and giving themselves a pat on the back. Me, I'm rooting for whatever Vol is playing....
Click to expand...
A-friggin-men... Personally, I don't care whether Jim from Morristown guessed right or not. Just win baby.
New posts
You must log in or register to reply here.
<< Tennessee Vols Football Forum
Share: Facebook Twitter Email Link