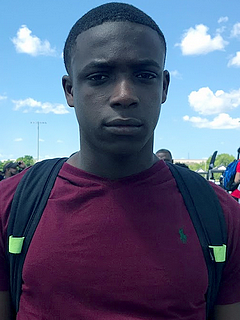 Visited for spring game and Vols offered. Brother of Jordan Mosley 2021 WR, who already had a UT offer.

Already pegged as the top class of 2021 safety prospect in Alabama by 247Sports, Jaden Mosley hit another milestone moment over the weekend. Following a visit to Tennessee, the Mobile (Ala.) McGill-Toolen rising-junior picked up his first SEC scholarship offer. The news wouldn't be something the 6-foot, 179-pound prospect would soon forget.

"I was happy, I felt like kid on Christmas morning," he told 247Sports. "And all my work is paying off! "The visit was fun man." In addition to campus tours, a look at the facilities and getting to wear fresh jerseys, Mosley was able to take in the trip with several of his high school teammates. The spring game itself stood out on Saturday and not just because of the on-field product.

"Tennessee fans bring a lot of energy," he said. "They really made me feel at home. I love it. "The energy of the fans and how nice they treated me, it was a vibe!" It was just before the event kicked off that the rangy safety prospect got the good news from a fellow Mobile native. "I was standing on the sidelines waiting on the spring game to start and then coach Tee Martin came up and told me," Mosley said. "I don’t remember what all he said but I know he said they offered me and 'congratulations.' "I also talked to the head coach (Jeremy Pruitt)...not too much, just talking about his players on the team."

Indiana, South Alabama and Central Michigan represent the sophomore's scholarship offers early on. With UT joining the fold how may the Vols fare in the race? "All I can tell you is they are up there," he said. The updated 247Sports class of 2021 rankings peg Mosley as the No. 15 safety prospect in the country.
Click to expand...
-247
Likes: Orange Swagger

Sitting here in Mobile now trading this. Hope Pruitt can get us back in this area again. Tee should help. Lotta talent on the gulf coast.
New posts
You must log in or register to reply here.
<< Tennessee Vols Recruiting Forum
Share: Facebook Twitter Email Link