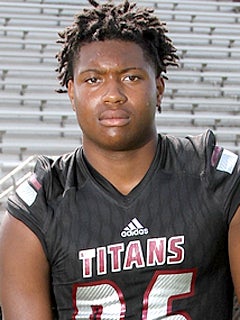 Vols offered back in April.
Likes: Vol Main, VOLSONLY, Freak and 8 others

The four-star Class of 2021 offensive tackle from Gadsden (Ala.) City High School said he was thrilled to add a scholarship offer from the Vols in April, and he’s hearing from them on a regular basis, led by offensive line coach Will Friend and head coach Jeremy Pruitt. The 6-foot-7, 285-pound Orr said he visited Tennessee for the first time Oct. 5 for its home game against Georgia, and he’s already hoping to make the trip to Knoxville again shortly after the ongoing dead period for recruiting.

“They’ve been contacting me a lot,” said Orr, who’s ranked by 247Sports as the No. 202 overall prospect and No. 22 offensive tackle in the 2021 class. “Every other day, he hits me up. They don’t want to bother me too much. Coach said he don’t want to worry me about it. “But he wants to be on me about Tennessee, let me know more about Tennessee, what’s going on down there — more about the players and the environment.”

Orr said Tennessee is “for sure” high on his list. He said Oregon, Missouri, Ole Miss, Mississippi State and Florida State are among the other schools that are likely to make his list of front-runners, which probably will be a top 10. He said “one reason” he’s strongly considering the Vols — and perhaps “the main reason” — is that “my cousin has committed there,” referring to Class of 2021 athlete/wide receiver Roc Taylor of Oxford (Ala.) High School. Taylor announced his commitment to Tennessee on April 10, and the Vols extended an offer to Orr less than two weeks later.

“That’s a good reason maybe to look into that school a lot, because I’d have my best friend down there with me at school. That wouldn’t be that bad,” Orr said. “He’s been talking to me about it. It’s a big deal in my decision. But it’s more about what my parents think I should do and where I think I will fit at.”

Tennessee also made a strong first impression on Orr during his visit there last season. “I went up there when they played Georgia,” he said. “I loved the environment. The school was nice. The people around there were cool. “At the end of the game, it was kind of exciting. I wasn’t even ranked back then, but people kept seeing me. Fans of Tennessee, they thought I was a player or something like that for Tennessee. They just kept asking for my autograph and stuff. I ain’t never had that happen before.”

Orr, who played on the offensive line for the first time last season, said the Vols have told him that he could address a need for them on the offensive line. “They said they’re getting rid of a whole class of tackles, and they need some new tackles coming in, so I’d be a good help to the team,” said Orr, who was rated a four-star prospect by 247Sports last week, vaulting into the Top247.

“I changed my position. I used to play defensive end. Last season was my first time playing offensive line. My coach said I need to move to offensive line. There was a couple people telling me I needed to do that. Me and my dad talked about it, and I finally thought it out one day, and I was like, ‘I guess I should try it out.’ It was during spring. “I started liking it, and it worked out for me in the long run.”
Click to expand...
-247
Likes: Brillovol, MoB_MoVols, VOLSONLY and 12 others

TrippieRedd said:
The name just sounds like a future legend.
Click to expand...
Didn't we have a RB recently with that last name
Likes: orangebloodgmc and T Dog

I like this kid’s film better than Colby Smith’s.

dcm3w said:
Didn't we have a RB recently with that last name
Click to expand...
‘19 PWO Fred Orr
Likes: orangebloodgmc and gorockytop98

Honestly wouldn’t be mad with Smith, Pounds, Griffin, and this kid. Honestly all have huge upside and won’t have to play immediately. Win/win imo

Gadsden kids tend to be tough customers.
Likes: T Dog and The Dog

highspeed said:
Gadsden kids tend to be tough customers.
Click to expand...
YellaWolf is from Gadsden. I've actually been to Gadsden and drove by that high school. Their football field is right next to the street and they had an artificial turf field, probably 5 years before Pilot changed all of Knox County's to artificial turf.
Likes: T Dog and GojiraVol17


Edit: I said honestly twice...hate myself.
Click to expand...
Not speaking against that, but I'm not giving up on Mims either.
Likes: Paper_Towel, SweetasSoda, VOLSONLY and 3 others
G

Glad to see some more names on our OL board.
Likes: tnutater, Brillovol, SmokeyDaBear and 3 others
P

TrippieRedd said:
The name just sounds like a future legend.
Click to expand...
We already have a Rod on our all legends team

pharmDvol11 said:
We already have a Rod on our all legends team
Click to expand...
This isn’t any ol Rod, this is ROD ORR
say Rod Orr in your head and think
“Rod Orr does sound like a future all pro name and legend”
Likes: GojiraVol17
P

TrippieRedd said:
This isn’t any ol Rod, this is ROD ORR
say Rod Orr in your head and think
“Rod Orr does sound like a future all pro name and legend”
Click to expand...
Ok but other Rod won’t be happy 🙄
Likes: Type Orange+ and tn4elvis

pharmDvol11 said:
Ok but other Rod won’t be happy 🙄
Click to expand...
I’m just playing around. Don’t be so uptight.

TrippieRedd said:
I’m just playing around. Don’t be so uptight.
Click to expand...
I know... I was trying to play along. This guy is a take imo
Likes: orangebloodgmc and VOLSONLY

So are we taking Rod Orr somebody else?
Likes: LittleVol