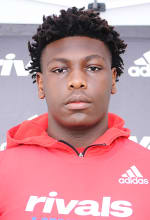 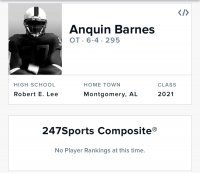 Vols recruiting him as a DT.

Anquin Barnes has been drawing interest from Tennessee for, according to his own estimate, the last three or four months. That interest in the 2021 defensive tackle from Montgomery, Ala., went to the next level during camp work on Friday. “They offered during a one-on-one (drill) at the camp,” Barnes told GoVols247 on Saturday. Listed at 6-foot-4, 295 pounds out of Robert E. Lee High School, Tennessee is just the sixth offer for Barnes and only the second power five school on his list.

West Virginia, Florida Atlantic, Jackson State. Toledo and Chattanooga offered before the Vols pulled the trigger on Friday. Alabama, Auburn, Mississippi State and Kentucky have shown interest but have not offered.

“I had been talking with the coaches,” Barnes said of Tennessee, “and when I came to the camp it was pretty much icing on the cake.” It was the first trip to Knoxville for Barnes, who had positive reviews about the trip outside of the camp setting. “It was fantastic,” he said. “(Knoxville is) a nice town, they got a lot of spots in the town. Got a lot of places for the players to eat and chill. They have their own game room for the players. It was really chill. I liked it. “Really it was just the way the coaches talked and interacted with me,” Barnes said his work on the field during the camp. “If I did something wrong. They were helping me, explaining it, helping me fix it. I liked that.”

Though he’s currently listed as an offensive tackle, Barnes is being recruited by the Vols as a defensive tackle, the position he’s used to playing and wants to play at the next level. “My strength is more of a run-stopper,” Barnes said of his game. “If you try to run through me, that ain’t going to work at all. I’m definitely a run-stopping person.”

Florida Atlantic also offered Barnes on Friday and a trip to to see Lane Kiffin’s program could be next on his schedule. Other than that, Barnes said he’s open. “Just looking for the next school to go to,” he said. Down the road, Barnes added that he’ll be back for another visit at Tennessee. “Oh definitely,” he said. “It’s fantastic. They were showing that they really want me there.”
Click to expand...
-247
Likes: FïreBall, wwilso29, T Dog and 2 others

Per twitter, he's coming back up this weekend. Two weekends in a row?

HoleInTheRoof said:
Per twitter, he's coming back up this weekend. Two weekends in a row?

The 6-foot-5, 299-pound defensive lineman did something one veteran coach had never seen before, breaking a piece of equipment during individual work.

“We went through the bags and I ended up breaking one of the sleds,” Barnes told Volquest.

“The coaches, they loved that. Coach (Rumph) said he’d never seen that before. Then we took it to 1-on-1s and I started dominating there. That’s when coach DA (Derrick Ansley) said, ‘We want to give you an offer.’

Tennessee joined FAU, West Virginia, Toledo and Chattanooga as early offers for Barnes, who also hears from Mississippi State, Kentucky and Auburn. The Alabama native figured his offer was coming from Tennessee last weekend, though, because Ansley challenged him before the camp.

“Coach DA came up to me and said, ‘If you do good, you know we’re gong to offer you.’ Then I did good,” he said, smiling.

Barnes made his second visit to Tennessee in a week Saturday, making the trip with Montgomery native and Vols top 2020 OL target James Robinson. He didn’t workout again, but said he spent the day chatting with coaches, observing the camp and spending time with current UT players.

“I love the campus, the players, just the whole vibe around the school. The way the players interact with you,” he said, noting that former Crimson Tide center Brandon Kennedy gave him several words of encouragement.

Barnes plays both offensive tackle and defensive tackle for Robert E. Lee High (Ala.) but projects as a DL in college. He prefers it that way, too.

“The coaches like how I get off the run block. (My) power.”

Barnes recently received an offer from Lane Kiffin at Florida Atlantic and he hopes to make a trip to down there soon. He also expects to be back at Tennessee sometime again this summer.
Click to expand...
-VQ
Likes: wwilso29, T Dog, SweetasSoda and 1 other person

“This is Barnes third visit in last 6 weeks.”

Anquin Barnes has seen plenty of Tennessee over the past few months. The Class of 2021 defensive tackle from Robert E. Lee High School in Montgomery, Ala., visited the Vols twice in a span of a little more than a week in late May and early June, and he found himself back in Knoxville again Saturday to attend Tennessee’s pool party.

The 6-foot-5, 299-pound Barnes said he “enjoyed” the visit, and while it’s still early in his recruitment, he likes “everything” he has seen and heard from Tennessee during his three visits with the Vols. “I like the environment and the way the coaches and players react and talk with me,” said Barnes, who has received early scholarship offers from more than a half-dozen schools, including Tennessee, Auburn, West Virginia and Toledo.

Barnes traveled to Tennessee for the first time May 31 to attend the Vols’ first camp of the year, earning an offer from them with a strong showing at the camp, and returned a little more than a week later with one of his friends: three-star offensive lineman James Robinson, who announced his commitment to Tennessee on Thursday. After his pair of earlier visits with the Vols, he said he enjoyed spending time with some of Tennessee’s coaches and players, along with other recruits, in a laid-back setting during Saturday’s visit.

“Saturday was more like a cool, chill day,” said Barnes, who has yet to be rated by 247Sports and in the industry-generated 247Sports Composite. "It was a day to have fun and get to know the players and coaches better. “I spent most (of the) time with the players, and the coaches were really just telling me to have fun and enjoy myself.” Barnes said Vols coach Jeremy Pruitt’s staff told him to simply “relax and have a good time” and “get to know everybody” while he was in Knoxville last weekend.

Tennessee’s coaches have impressed Barnes so far. “They’re pretty much straightforward,” he said. They pretty much don’t sugarcoat it. They tell you what it is and what you need to do.” While Barnes already has spent plenty of time at Tennessee recently, he said he’s hoping to return to Knoxville yet again to see one of the Vols’ home games this season.

Tennessee is one of the schools that already have caught his attention, and it doesn’t hurt that one of his friends, Robinson, now is committed to the Vols. Barnes admitted “it would be cool” to join Robinson at Tennessee, but he doesn’t expect Robinson’s commitment to steer him toward the Vols or play a major role in where he ultimately decides to play. “I had a good thought that he was going to Tennessee, so I wasn’t really surprised,” Barnes said of Robinson. “It won’t really be a big deal in my interest (in) UT, but it would be cool playing with him at the college level.”
Click to expand...
-247
Likes: T Dog and SweetasSoda
S

The schools he currently communicates with most are Florida and Tennessee. The Vols offered early, and the Vols have his attention.
"I like Tennessee. It is a good school and they are talking to me a couple of times a week right now. They have a good team, they played well this season and I am going to back up there sometime soon."
Click to expand...
Rivals
Likes: highspeed, GojiraVol17 and T Dog

Visiting this weekend for junior day...

Alabama defensive lineman Anquin Barnes, who visited Tennessee many times over the last year, will also be back in town.
Click to expand...
- VQ

This kids visited a bunch, wondering if he commits soon?
Likes: T Dog, LittleVol and tn88volfan

This kids visited a bunch, wondering if he commits soon?
Click to expand...
Would love to get some big DL in the boat early and start peer cruiting for us.
Likes: chargervol
V