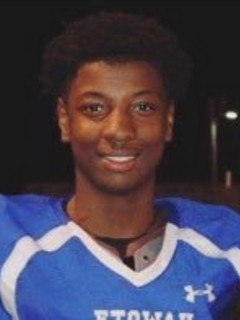 Red-hot north Alabama recruit visiting UT this weekend for the first time, De'Rickey Wright will be on campus. 20 total TDs as a junior playing QB, WR, OLB, DB, everything. 6-3, 220 with offers from LSU and Notre Dame today, Alabama last weekend and a bevy of P5s otherwise. No Vol offer just yet...
Click to expand...
- John Garcia Jr, 247
Likes: FïreBall, T Dog, bbstone and 4 others

Baller on both offense and defense. Sign him up, we can worry about position later. 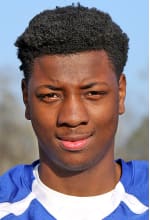 Bama commit, Camping at UT this Friday per 247
Likes: T Dog, dmwhite1, sneakergawd and 1 other person

The 6-foot-4, 220-pound athlete worked out at Alabama's camp on Saturday. He put in a strong effort on both sides of the ball.

"The camp was great," Wright said. "They had me at safety, receiver and tight end. I think I did pretty good at all of them, but I got way more reps at safety. So, it was hard to tell.

"I like that I was able to get taught some things and drills by some amazing coaches and players. I was also able to go against some good talent."

Wright made note of enjoying the time spent on the field with new safeties coach, John Kelly. He also enjoyed spending a little bit of time with Coach Saban. He said the best part of the visit was going to work.

"Just going out there and competing," he said when asked about the best part of the trip. "Just being able to be coached by a great staff. It's always great to be back there."

The Tennessee Volunteers are making a run for the talented athlete. He camped in Knoxville on Friday. Wright has mutual interest.

"Tennessee was amazing," he said. "I really liked everything about it. I haven't thought about de-committing (from Alabama), but I am considering Tennessee.

"'I am a personality and vibe guy. When I was up there they had amazing vibes all day. The coaching staff is also amazing."
Likes: WilliamDuVOL, FïreBall, T Dog and 8 others
D

Honestly I think we have everything in place right now to land top 10 classes consistently. We just need to win and show progress on the field.
Likes: FïreBall and SweetasSoda

DaddyChad said:
Honestly I think we have everything in place right now to land top 10 classes consistently. We just need to win and show progress on the field.
Click to expand...
We will, dont worry your little heart.
D

HoleInTheRoof said:
Decommitted from Alabama
Click to expand...
Right from a visit to Kensucky. What’s really going on

So did he commit or decommit?

Blake25p said:
So did he commit or decommit?
Click to expand...
Wright decommited then Bama got a high 4 star DE
Likes: Blake25p

Alabama was looking at him as a WR/TE/S. So why would a DE commiting mean he got a git?

HoleInTheRoof said:
Alabama was looking at him as a WR/TE/S. So why would a DE commiting mean he got a git?
Click to expand...
To clear room

Posters on Bama247 aren't acting like it was a gitshirt, most are bummed he's gone. No mods comment yet on if he was asked to decommit or not that I can see.
Likes: SweetasSoda and Sleegro
New posts
You must log in or register to reply here.
<< Tennessee Vols Recruiting Forum
Share: Facebook Twitter Email Link