Super talented regional. Will be fun to see all the talent in action.
Likes: VolPack22, worthlesswanderer90, HeadVol77 and 2 others

Chase Dollander is one of five finalists for College Baseball Foundation's National Pitcher of the Year:

The five finalists for the 2022 Pitcher of the Year Award are sophomores Chase Dolander from Tennessee, Pete Hansen from Texas, Connor Hjerpe from Oregon State, Rhett Lowder from Wake Forest and Drew Thorpe from Cal-Poly.

“This is an exciting group of finalists that all exemplify exactly what this award is about,” said Chris Snead, Pitcher of the Year Award co-chair. “Each is talented in their own right and a leader on their respective teams.”

Chase Dolander, Soph., Tennessee: Perhaps the most consistent pitcher on the most consistent team from the start of the season until now, Dolander is an ace in every sense of the word. In leading the Vols to the SEC regular-season and tournament championships, Dolander went 9-0 on the year with a 2.21 ERA and 99 strikeouts in 69.1 innings. He was named SEC Pitcher of the Year.

Chase is also Collegiate Baseball's Co-Freshman Player of the Year along with NC State's Tommy White.
Likes: Volbackhomefromtx, cobbwebb0710, chuckiepoo and 6 others

This was a great thread! A lot to be proud of. What were some of the biggest team and individual accolades in your opinion of the 2022 season?
Likes: worthlesswanderer90, cobbwebb0710, hjeagle1vol and 2 others 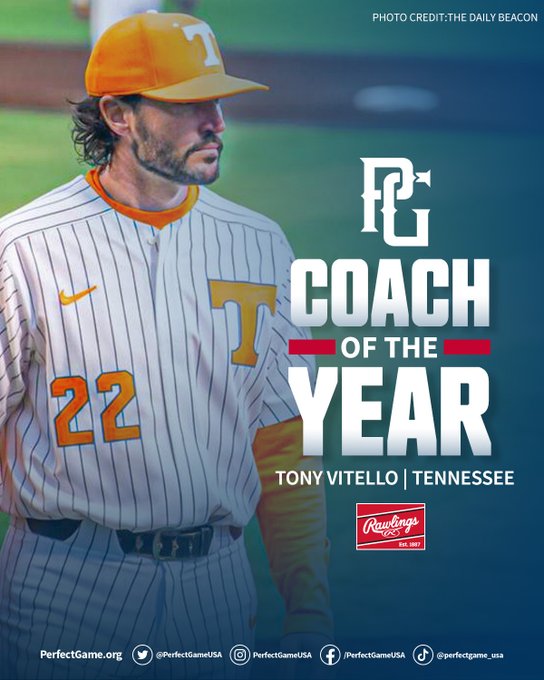 2022 Perfect Game/Rawlings Coach of the Year:

Quickly turning into the Alabama of college baseball, no team generated more polarizing opinions, or dominated opponents so thoroughly at times, than Tony Vitello’s Tennessee Volunteers. They were upset by Notre Dame in the Super Regionals but the Vols turned in one of the most dominant performance in recent history, ascending to No. 1 in the country and never looking back the rest of the season.

They were a complete and cohesive team, leading the country in both ERA and home runs and doing it with a combination of youth and veterans. Two-thirds of their ERA-leading weekend rotation were true freshmen in Drew Beam and Chase Burns, while the third, and SEC Pitcher of the Year, was a true sophomore transfer also pitching his first year in the SEC. Veterans like Trey Lipscomb and Luc Lipcius became household names while the offense was cruising, culminating with an early season shellacking of perennial CWS contender, and in-state rival, Vanderbilt.

Vitello managed both to assemble a team that is perhaps the most talented in recent memory all while managing expectations of said club to keep them playing on the top of their game. They might not have made it to Omaha for a second consecutive year, but Vitello has won Coach of the Year for consecutive years and there’s no doubting that he’s among the best coaches in the sport at one of the best programs.

Tony Vitello and the Vols have become the face of college baseball. I’m sure Omaha and the networks are disappointed that Tennessee and all the storylines and characters aren’t a part of it.
Likes: worthlesswanderer90, youcancallmeAl, cobbwebb0710 and 4 others

mad4vols said:
Tony Vitello and the Vols have become the face of college baseball. I’m sure Omaha and the networks are disappointed that Tennessee and all the storylines and characters aren’t a part of it.
Click to expand...
How anyone can call this season a disappointment is beyond me? It had a disappointing ending but the season as a whole was a huge success!
If anyone thinks differently, just scroll through this thread.
GBO!!
Likes: Volbackhomefromtx, GenRRN, HeadVol77 and 6 others

TN_gal said:
Click to expand...
Can my guy Luc, get some love from somebody?!
GBO!!
Likes: Volbackhomefromtx, chuckiepoo, TN_gal and 2 others
Y

cobbwebb0710 said:
Can my guy Luc, get some love from somebody?!
GBO!!
Click to expand...
You're right, he should be getting some accolades too, for what he did for this team. Lifted a heavy load, for sure.
Likes: chuckiepoo, HeadVol77, TN_gal and 1 other person
New posts
You must log in or register to reply here.
<< Tennessee Vols Baseball Forum
Share: Facebook Twitter Email Link