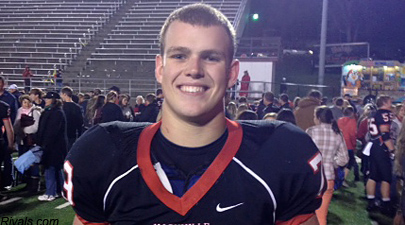 Look for Knox-area standout Dylan Jackson, a surging 2015 talent at Maryville High School who already has competed in both Rivals and Nike events in Atlanta and will participate in the Rivals challenge next weekend in Charlotte, to be on campus this weekend as well. Jackson is a 6-foot-5.5, 225-pound defensive lineman who's beginning to hear from major college programs. He's been to UT a couple times already, has spoken with offensive coordinator Mike Bajakian and will be featured more in-depth later Friday here on VolQuest.com.
Click to expand...
-VQ
Likes: 3 people

Sweet. Anybody see this kid play?

Sounds good so far. Him, Stewart, and Mitchell seem like excellent defensive in state recruits.

Kids film is pretty solid, looked like Mutumbo blocking shots at the beginning.

I'll be at a few games this year. A few high-schoolers I teach at church play with him.

Great size and explosion, he could greatly benefit from some quicker feet and some of our strength coaches work as far as lateral quickness, but that will come with time and good coaching. Great prospect, always good to see kids in the immediate area do well.
V

ssims6 said:
Sounds good so far. Him, Stewart, and Mitchell seem like excellent defensive in state recruits.
Click to expand...
4.99 40 is somewhat suspect for defensive end. With another 70-80 lbs, could be OL .
C

I would love for Jones to get into my old stomping grounds in Blount County. Maryville High School is dominant. I'm surprised that there have not been more D1 prospects out of that school with all the state titles they have.

VOLINVONORE said:
4.99 40 is somewhat suspect for defensive end. With another 70-80 lbs, could be OL .
Click to expand...
Yea he sure wont be getting any separation with that speed running routes....:ermm:
Likes: 2 people

"It was actually pretty shocking. We had just gotten done working out and were sitting in the basketball locker room. I walk out and coach Bajakian is standing there. I was just shocked," said the 6-foot-5.5-inch, 225-pound Jackson. "It's an awesome experience. He's a really nice guy. He seems like a fun coach to watch from going to that (earlier) spring practice."

But, said Maryville's nine-time state-champion coach George Quarles, Jackson has taken nothing for granted. "Dylan has those things that you cannot teach a player," said Quarles, who has led his teams to the state championship game in 12 of his 14 years atop the Rebels' program and routinely gotten interest from college programs. "He has great size and length. He runs very well for a big man. "On top of that, he works hard and is competitive. Put all those together and you see why he has a chance to be a really good player."

Jackson, who indicated he will be at the Vols' scrimmage on Saturday and hopes to attend the April 20 Orange & White game as well, said his camp experiences this year have given him plenty of lessons to help make him a better player.

"Defense has always been my main thing. I just feel like I play a really aggressive game," he said. "I like getting up in there and hitting people."
Click to expand...
-VQ
Likes: 3 people
D

Was here on 3/9 and will be here tomorrow and then for the O&W game.

DylanVol said:
Was here on 3/9 and will be here tomorrow and then for the O&W game.
Click to expand...
Ummm. Hi Dylan
Likes: 1 person
D

Maryville is the most disciplined, hard-working, well-prepared program year in & year out. Quarles is an unbelievably great coach & he has excellent assistants as well. 12 out of 14 years he has been in the state championship game. Everyone said when Maryville moved to 6A, they couldn't keep up their winning. They're 4 for 4 in SC games. Quarles' record at MHS is 193-14 from 1999-2012! I know this doesn't mean Jackson is a 5-star or anything, but that's the type program he is coming from!

DylanVol said:
Hi...I guess?
Click to expand...
Look at the thread name. Look at the post I commented on. I was joking that you are Dylan.

Unless you are
Likes: 1 person
B

Dylan is a great player. He is part of an upcoming junior class at Maryville that is really strong.
D

OddFuture said:
Look at the thread name. Look at the post I commented on. I was joking that you are Dylan.

Unless you are
Click to expand...
I get it. No, I just love Bob Dylan
M

My little cousin plays at Farragut and is good friends with Dylan. The two of them went to the scrimmage today and loved it according to my cousin. I'll let y'all know if he tells me anything else. I have to admit, I liked the news a lot since my cousin is, somehow, an Ohio St fan.

ChuckNorris said:
Yep!
Click to expand...
As Chuck has said, so shall it be.
Likes: 1 person