Tell your grandkids where you were during Top 10diana.
Last edited: Nov 14, 2020
Likes: VOL_Lyfe and VolNExile

I keep waiting for Indiana to Indiana, and yet they keep failing to Indiana.
Likes: sierraorange
S

Why didn't the staff want this QB Penix out of Florida?
Likes: sierraorange

Stephen A Smith said:
Why didn't the staff want this QB Penix out of Florida?
Click to expand...
Were worried about the risk of too many Penix jokes.
Last edited: Nov 14, 2020
Likes: VolNExile and VolnJC

VolsSportsFan said:
I keep waiting for Indiana to Indiana, and yet they keep failing to Indiana.
Click to expand...
Probably next week when they have to go to OSU.

Apparently Indiana has been trying to recruit more from the southeast. A combined 42 players on their roster come from SEC states, with 22 players having been recruited from Florida. (Only somewhere in the mid-30s are from the state of Indiana.)

MSU has driven from their own 5 to about the IU 38 so far on this drive.

Nice interception by Indiana. The return puts them inside the MSU 10 with 11:29 left in the game.

IU wins 24-0. For the first time ever, the Hoosiers have beaten Penn St, Michigan State, and Michigan in the same season (which while I guess it is significant, but IU and PSU didn't really start playing each other until PSU joined the conference in 1993). First 4-0 start for IU in the conference since 1987.

They also get to take home the Old Brass Spitoon trophy for the first time since 2016, ending MSU's 3-game winning streak in the series. 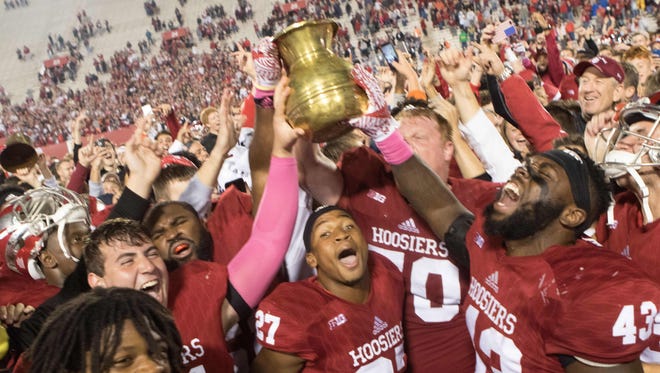 Must be nice to have a winning football program. Oh well.
Likes: VOL_Lyfe

Every day, the staff's decision back in 2017 to tell Michael Penix to take a hike looks worse. Not sure if it was a Pruitt decision or a Helton decision, but Penix much better than any QB on our roster right now.

Guess we can add him to the list of QB recruiting blunders with Tajh Boyd and Trevor Lawrence.
T

VolsSportsFan said:
......Ok.
Click to expand...
Not really. The starting QB for Indiana was injured and not playing in that game.

Keep in mind IU’s two big wins are against Michigan and Penn State who are 1-7. We’ll see if they’re for real this week.

Hoosier_Vol said:
Keep in mind IU’s two big wins are against Michigan and Penn State who are 1-7. We’ll see if they’re for real this week.
Click to expand...
That's a good point.
New posts
You must log in or register to reply here.
<< Around the NCAA Forum
Share: Facebook Twitter Email Link